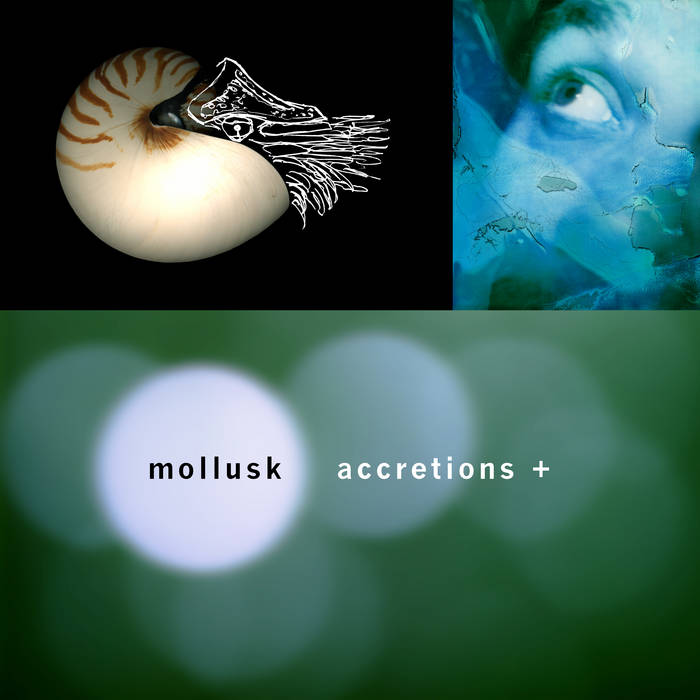 The Mollusk project completely captivated me on several counts. First of all the environment of the mollusk was fascinating, so alien and so beautiful as well. Secondly, I felt that working in the lo-res sound, something i stumbled upon in trying to create smaller files for quicker downloads, nicely captured an oceanic sound. When I listen to these tracks now, they really do seem to be the product of another artist, not just a pseudonym, something channeled from another world altogether. And I still think the concept was a brilliant, if short-lived, work-around and commentary on the state of online audio at the time. For this release I have included 30+ minutes of non-album tracks, pieces that had only ever been available directly from the long defunct Mollusk website, as well as a PDF with additional commentary and graphics, one of my favourites of the bonus materials. - M. Bentley

4/29/2020 - I have expanded this album again, for a total of 20 tracks running to nearly two hours. This is the definitive edition, and I believe that all Mollusk related work is present and accounted for, including the four-part Argonautica collaboration with Jonathan Hughes, and Sea Boy, Mollusk's tribute to Dean Santomieri's The Boy Beneath The Sea. Enjoy! - Michael

From the press release:
Accretions is the first CD release from Mollusk, the musical alter ego of Malcolm Bly. A melding of organic inspiration and digital audio, the music of Accretions delves into an oceanic realm with compositions at once experimental and atmospheric. Waves crash, tides ebb and flow, and the ancient mollusks follow their own paths through this wonderful collection of shell-like convolutions and liquid sonics.

Malcolm Bly has drawn inspiration from the unique world of the mollusk. The track titles reflect this: Hadal being the deepest area of the ocean, Littoral (a non-album track available online) being the area where most mollusks live between the sea's edge and the lower limit of chlorophyll producing plants.

"Many of the ideas which lie behind these tracks came directly from reading about mollusks and natural history," writes Bly. "I found these creatures at once very alien and yet so compelling. This music just seemed to record itself, the result of great enthusiasm and experimentation. The possibilities seem endless!"

Mollusk began as a way to explore the possibilities of online audio and different approaches to producing music for the internet. Malcolm Bly was working in web design at the time, and created the music of Mollusk entirely through digital means, employing sampling and sundry DSP applications. Bly has also experimented with the process of encoding MP3s, often choosing lower kbps rates in order to create a "low resolution" sound.

"It seemed to me that the medium of the MP3 wanted to be played with, explored for its own abilities, not simply used as a means to poorly represent higher quality sounds."

To this end Bly incorporated the idea of low resolution audio output into his compositional approach, so that the final form of these pieces has, until this release, not been a CD or 16-bit/44.1kHz sound files, but a stereo MP3 file. Besides creating what Bly refers to as the "Mollusk sound," working with low kbps rates meant that the resulting MP3s were smaller than those produced at the more common 128kbps or 192kbps, and this meant shorter download times. For instance, the 20 minute Ancient Seas became a meager 4.6MB, instead of the 18MB one might expect.

"I was trying to play to some of the strengths of the technology that's out there, while also creating music worth listening to. Mollusk is a site which does not depend on super fast connections, but does, I hope, provide interesting content. I am constantly surprised how many web designers try to use all the bells and whistles that are out there, knowing that these gimmicks make downloading incredibly tedious, if not impossible, for a large number of users. I tried not to fall into this trap when creating the Mollusk website..."

For the Accretions release, Mollusk has created the new track Barnacle: Archipelago, and remixed/remastered all the compositions to CD quality audio. The tracks The Sea and The Cry of the Distant Nautilus retain the low resolution Mollusk sound, but the other pieces have been recreated in high resolution 44.1 kHz sound.

"Initially I thought releasing these tracks on CD was beside the point, in fact counter to the aesthetic and concept of Mollusk. Of course it's always flattering to be asked, and after some consideration, putting together an album seemed an interesting opportunity. Some tracks retained the low res 'mollusk' sound, but others, The Evolution of the Snail's Brain for instance, benefit from being on CD, which better reproduces the high and low frequencies in this quiet set."

Accretions represents a melding of digital audio and organic inspiration. While by no means documentary, Mollusk delves into the oceanic realm with compositions at once experimental and atmospheric. Waves crash, tides ebb and flow, and the ancient mollusks follow their own paths through this wonderful collection.